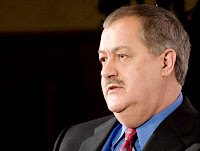 Dylan Matthews has a detailed post on the union-busting, environment-ruining, cameraman-threatening ways of Massey Energy CEO Don Blankenship, 25 of whose workers just died in a mine explosion. The news:

West Virginians overwhelmingly oppose mountaintop removal mining, and some politicians, like Sen. Robert Byrd and Rep. Nick Rahall, openly criticize Massey. But the effects are limited, as Blankenship has more or less purchased the state's government. He's certainly bought the state Supreme Court, spending millions to unseat a justice who had ruled in favor of mine workers. The court, including the new justice Blankenship had elected, soon thereafter reversed a $50 million judgment against Massey. The U.S. Supreme Court eventually had to demand a rehearing of the case with the new justice recusing himself, because the quid pro quo involved was so obvious. Similarly, when Gov. Joe Manchin proposed a bond not to Blankenship's liking, the businessman spent hundreds of thousands of dollars to sink it. After the bond vote, Blankenship sued Manchin, saying the governor's attempts to regulate Massey amounted to punishment of Blankenship for opposing the bond measure, and thus was a violation of his free speech rights.

The federal government may have its corruption and special interest problems. But here's one nice thing about Washington: it costs so much that Don Blankenship can't buy it all. At present, even West Virginia's federal legislators, Nick Rahall and Robert Byrd, have been dissing on him. Maybe if he had to focus all his energies on getting their support, he'd make some headway, but even so he wouldn't have as much control over his regulatory fate as he does with the locals in Charleston.

This is one reason why it's a lot better to see the federal government in charge of labor and environmental regulations than the states. Dylan talks about campaign finance restrictions in the post, and if there's some way to make those work, great. But another way to deal with the problem is to take the responsibility for protecting workers and the environment out of the hands of people who are in Don Blankenship's pocket.
Posted by Neil Sinhababu at 4/07/2010 01:06:00 AM