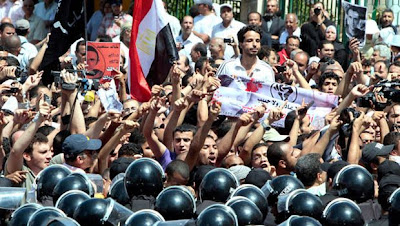 Barry Desker is a former Singaporean ambassador to Indonesia and current public policy dean at Nanyang Technical University (that's the university that we at NUS would have a rivalry with if they played college football down here.) He has an interesting analysis of the possibility of political upheaval in Egypt and the rest of the world (pdf). The general idea is that a large number of educated young people who can't find any work and are in an unhappy economic situation is a recipe for political instability.

Egypt’s population has expanded from 30 million in 1966 to 85 million today largely living along the Nile River. Its people crowd the 40,000 square kilometres of land suitable for housing and farming. There is a growing shortage of arable land while economic growth has not matched population growth. Youth unemployment is increasing rapidly as more than 4 per cent of the population enters the work force each year. Unemployment for university graduates is ten times that of the general population. Rising costs of food, accommodation and petrol has fuelled the recent unrest...

The youth uprising in Egypt draws attention to the impact of similar youth bulges as a result of rapid population increases over the past 20 years, especially in sub-Saharan Africa, North Africa, Iran and Turkey as well as a crescent extending from the Palestinian territories of the West Bank and Gaza, Iraq, Saudi Arabia and Yemen to Afghanistan and Pakistan. The authoritarian polities and lack of employment opportunities in many of these states in the crescent and their continuing rapid population growth will fuel youth resentment and rebellion, with a significant risk of political volatility and violence.

By contrast, over the next 20 years, the Maghreb countries, Iran and Turkey will see declines in their rate of population growth. They should benefit from growing numbers of educated youth in their expanding economies, just like Vietnam, Malaysia and Indonesia. The medium term outlook for these states is therefore positive.

I think the idea with these places is that you do very well if you have lots of educated young people and they get productive career opportunities. He also considers India and China:

Turning to other parts of Asia, although India’s population will increase to 1.45 billion by 2025, it will benefit from economic growth. However, there are sharp differences among the regions – namely, the high-growth commercial centres of Mumbai, Delhi and Kolkata; the low fertility states of South India with their information technology hubs and booming services sector; and the ‘Hindi speaking’ belt of north India with its higher fertility, lower educational levels, lower levels of female employment and slower growth of the services sector. Youthful challenges to the political status quo are more likely in north India.

Oh, crap! My family's from North India. The state of West Bengal, where they live, has some problems with Maoist guerrilla terorrism. When I visited last year, my relatives were telling me that the demographic profile of a Maoist guerrilla is basically what Desker describes -- a guy who works himself through school and finds that there's no opportunities out there.

By contrast, in China, we will see more conservative attitudes as a combination of economic growth, the rapid aging of China’s population and the expectations of a better life by China’s youth result in a preference for the status quo. Already, China’s Internet savvy youth are among the most nationalist and have been active in pushing for strong government action in the face of perceived slights by external parties such as the United States, Japan and, in the case of the South China Sea, even Asean.

I don't know a lot about nationalism among Chinese youth, but in general nationalism in powerful countries is bad news. It can lead to Tibet being oppressed or Iraq being invaded.
Posted by Neil Sinhababu at 2/10/2011 07:14:00 AM