When A Judge Bites A Dog, That's News 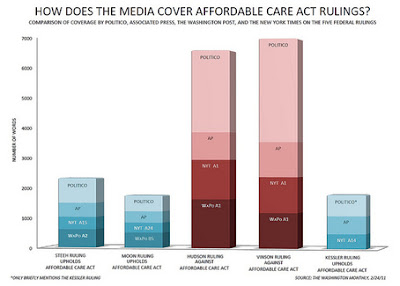 Ezra cites a chart from Nancy Pelosi's office pointing out how much more coverage rulings against the constitutionality of health care reform have gotten than rulings favoring it. A simple explanation would be that when judges do things that create exciting partisan conflict, there's going to be a lot more media coverage.

This dynamic isn't good for public knowledge of where real controversies are. Or maybe it's good in the worst way -- a right-wing media infrastructure feeds craziness to people, motivating movement conservative judges and politicians to do crazy things, resulting in... real political controversies that one has to engage.

Anyway, Ezra's chart showing that 22% of Americans think that health care reform has already been repealed is amazing and depressing.
Posted by Neil Sinhababu at 2/25/2011 01:57:00 AM

Depressing? I say that it's encouraging. All we need is another 20-30% of the population to believe that it's been repealed and it will no longer be an issue. Right?

Ha, that'd be cool, JR. Sadly the powers that control this kind of misinformation probably will intervene before the point of non-issue-hood.