The Inmates are Running The Asylum 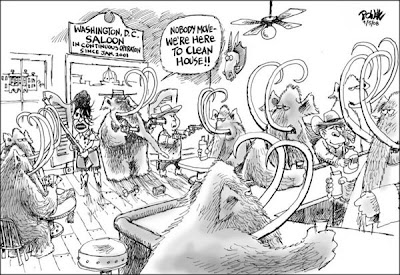 It's saying something when Dick Wadhams, the man behind George Allen's Senate campaign, has "tired of those who are obsessed with seeing conspiracies around every corner and who have terribly misguided notions of what the role of the state party is while saying 'uniting conservatives' is all that is needed to win competitive races across the state". Wadhams left the wreckage of the Allen campaign to work in Colorado, where he became state party chair, only to have Tea Party-backed candidates implode in the races for both Governor and Senator.


It's easy to overstate the impact that right-wing or left-wing candidates have on electability. In an overwhelming number of races, ideological positioning matters very little, if at all. But on the margins, it can have an effect. More importantly, it seems to be dissuading rational political operatives from staying in Republican party politics, which may eventually become a serious problem.
Posted by Nick Beaudrot at 2/08/2011 07:52:00 AM