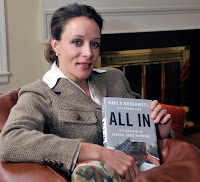 Sniggering about the title of the book aside, I see it as unfortunate that David Petraeus has to resign because of an extramarital affair with his biographer, Paula Broadwell. I kind of wish Obama would tell Petraeus that somebody else sitting in the Oval Office had an embarrassing extramarital affair some years ago, and that he went on to do a pretty good job of being president, so Petraeus should just get back to work.

Better to ignore public servants' private lives and just grade them on their job performance. Keeps you from losing people who are doing their work properly.

Update: Many right-wingers are seeing all this as part of a Benghazi-related conspiracy. Foreign Policy considers several of the theories offered by people who can't spell Petraeus. I understand leaving out the 'e', but adding an 'o' or a 'y' is a larger mistake.
Posted by Neil Sinhababu at 11/11/2012 02:23:00 AM

I would consider that there is probably a lot more to the story than is publicly known, and "just an affair" is the polite way of putting it. It would be cruel and pointless to dig too deeply into this, but it's pretty clear that a consensual affair that doesn't have other legal problems isn't enough to end a famous politician's career at this point.

He wasn't doing his work properly. He allowed his mistress access to sensitive information. This whole thing came to light because of an FBI investigation into a security breach that turned out to originate with him.

Yeah, this would make sense if there's more to the story.