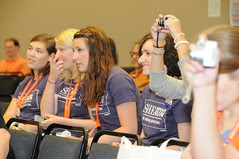 This post is brought to you by the number 24. As in 24%, which is the percentage of state legislators who are women. (Outdated but prettier PDF)

I have many points to make about Netroots Nation, but there's a reason I'm starting with this one. With the exception of Native Americans, LGBT officeholders, and avowed atheists, this is probably the most flagrant example of an underrepresented demographic among our elected officeholders. And the situation is much, much worse at the federal level, where women account for only about 13% of Congress.

It's almost certainly the case that the electorate does not discriminate against women in their voting habits quite so flagrantly. Sure, it happens, but most of the discrimination occurs before women even get on the ballot. Inequality in household work means women, as a whole, have less time for their professional careers. The available evidence suggests that women with school-age children still face significant workplace discrimination. But among the problems easiest to correct, it's still the case that women are less likely to be recruited to run for office. Why exactly this is case is unclear, but the simple solution is to make a point of asking more women. This ain't rocket science.

The Women's Campaign Forum, headed by former Congressional candidate Samantha Bennett, is dedicated to getting more women into the political process. You can help by recommending that the WCF ask someone to run. They may say no, but that's okay. To take a piece of advice from dating, if the WCF asks 100 people to run for office, and 99 of them say no, do you know what they've got? A candidate.
Posted by Nick Beaudrot at 8/17/2009 12:02:00 AM

How about people with income within lowest 80%? Are there any such people in the government? Also young people (let's say 18-30). There are hardly any!

In both cases that's far worse than underrepresentation of women, and nobody does anything about it.

taw, I think those groups are underrepresented for a broader bad reason: running for office takes money and they don't usually have it. Solving that financial problem is probably a larger practical obstacle than the gender issue.

WRT 18-30 year olds, there's this pesky thing called the Constitution. The few really young Democrats have aged out of that bracket -- Meek, Ryan, a few others. McHenry, Chafetz, and Schrock are under 30 I believe.