This is a big part of what's making me think we should end military operations in Afghanistan: 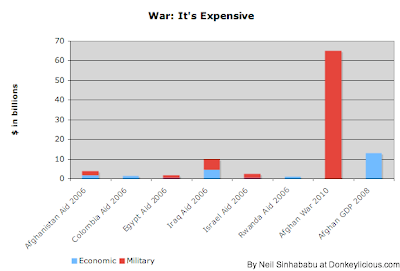 As I used to write about in a previous blogging project, fighting wars is really expensive. As Matt pointed out some time ago, we're paying more than five times Afghanistan's GDP to fight a war in the country. There's got to be some more efficient way to achieve the limited percentage of our goals that a military operation is capable of achieving. With foreign aid, we might be able to do it while killing fewer people, and getting fewer of our people killed.

This isn't to say that everything goes perfectly with foreign aid. I'm sure that in a country like Afghanistan, a large percentage of the aid will be lost to corruption of some kind or another. But even considering that, I'd bet that you could do plenty of good by some combination of building infrastructure and handing out food and giving big bribes to the people who give out medium-sized bribes so the small bribes go in the right direction. More good, I'd think, than if you spent the same amount of money on fighting war the expensive way America has to.

$65 billion worth of HSR would probably save more net lives.