The Articles Of Confederation 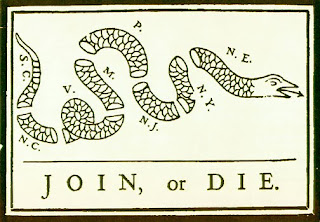 The Revolutionary War, and the events leading up to it, are the kind of things that stick in your mind. There's dudes dressed as Indians throwing tea into the ocean and "no taxation without representation!" and Washington crossing the Delaware and a ragtag band of ewoks defeating the Empire.

And then there's the utterly forgettable period during which we had the Articles of Confederation. Until I went on wikipedia and looked it up, all I knew about this period was that in some vague way things weren't centralized enough and didn't work. (Which is embarrasing, because actual historians sometimes read this blog.) And as far as I can see, things were pretty awful. Without the power to tax, we couldn't raise an army or give veterans their pensions. Since we didn't have a proper navy, Barbary pirates would enslave our sailors. The money of an insolvent federal government became worthless. Since we hadn't assembled into any sort of functional economic bloc, Europeans would abuse us in trade wars.

Of course, this is mostly the boring kind of awful. You can easily make movies about American patriots triumphing over the British in the Revolutionary war, but the move away from the Articles and towards the central government that made America a functional and eventually awesome nation isn't summer blockbuster material.

This is an unfortunate thing. More attention to this time period would make the valuable point that having a strong central government is a very helpful thing in the modern world. Without taking lots of power away from states and establishing a working federal government, we'd be in chaos with a failed currency, no army, a terrible economy, and enslaved sailors. The way we got out of those problems deserves to be a bigger part of our national myth than it is.
Posted by Neil Sinhababu at 3/10/2010 01:43:00 AM

I agree with your central point, I guess, but there's plenty in the myth about the Miracle at Philadelphia. I have to chuckle as I write that since the key -- one of the keys -- to the Miracle is the creation of the Senate. No Senate no deal, much as it might annoy you now . . .

As a product of the American public school system, I have always been totally confused by the amount of emphasis placed on states rights, for the specific reason that I was taught about the Articles of Confederation. The states had too much power. It didn't work. The End. History actually proved that things work better with a stronger central government, so why would people still argue to the contrary?

Oh, right. Because of the Civil War and Slavery.

I have always read any argument for states rights as being an implicit argument for racism, since there is really no other reason to support such a thing. And that's because of things my teacher told me.

I wonder if my spending grades 4-12 in North Carolina public schools is part of the problem.

Yeah, that might be it. I grew up in Illinois, in the Northwest corner of Chicagoland, so we had posters in class of Lincoln looking like some kind of glorious prophet. And whether John Brown was a force of good or evil was left open to interpretation.

You history books didn't refer to it as "The War of Northern Aggression," did they?

This isn't a new phenomenon. I'm reading a history of early nineteenth century America now and it is interesting the extent to which anti-federal government, anti-tax and anti-elite ideology made it difficult to run a develop a functional government or fund internal improvements. In a lot of ways the tea party crowd and other right wing populists seem similar to the Jacksonian Democrats (and in a number of ways Obama seems like a modern Whig). The issues are obviously different now than they were back then. But on the level of political culture, there seem to be a lot of similarities.