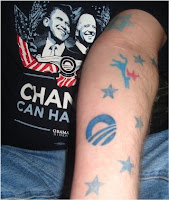 You know how it happens at the end of contested primaries, when most of the people who were fighting bitterly for the losing candidate have a rapid emotional transition and become fervent supporters of the winner? I've seen it twice now on the big stage, for both Obama and Kerry, and it's an astonishing psychological phenomenon.

We're seeing the beginning of that now. If all goes smoothly, in a week we'll love this health care reform bill so much that ill-considered tattoo decisions may result. Remember, kids, these things are permanent. Take care of yourselves.
Posted by Neil Sinhababu at 3/18/2010 04:48:00 AM