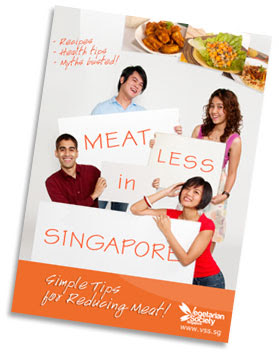 The Vegetarian Society here in Singapore just put me on the cover of a pamphlet about eating less meat. As someone who eats less meat than a lot of people, it's something that I was suited to. Two people cutting their meat intake in half is just as good as one full vegetarian for all the animal welfare and environmental benefits, so even if you don't have it in you to go totally veggie, reducing your meat consumption is a good plan.

They did the photo shoot back in December. I was by myself holding a blank sign, and they photoshopped the words onto it and then photoshopped me together with all the other folks. I didn't know that's how these things were done, but now I do. They wanted to fit the demographics of Singapore and have young people, and I gave good Indian boy.

I recently asked my department head about doing PETA-style nude guy modeling. She told me that the university administration comes from a fairly conservative Chinese culture and it could get me in trouble, so for better or worse there won't be any of that for the time being.
Posted by Neil Sinhababu at 3/30/2010 04:36:00 AM

No offense, but I am relieved that there will be no PETA-style nude modeling in your future.

But the pamphlet looks very nice. Is it only produced in English, or does it come in some of the other languages used in Singapore?

Not yet, I think... I suppose Chinese would be a possibility. But English is a language generally known by educated Singaporeans of all ethnic backgrounds, so it's the natural choice.

this post is hilarious on at least five levels. thank you for brightening my morning

So is that demographic cross section supposed to be a Chinese boy, an Indian boy, a Chinese girl, and a Malay girl?

Yep, that's about right, Bruce. Though I think I and the Malay girl are ethnically ambiguous enough to cover a little bonus territory.