Where Jim Bunning Comes From 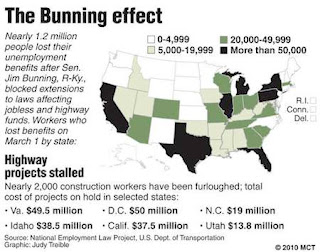 Jim Bunning has finally ended the ridiculous stalling tactics that were holding up people's unemployment benefits and health insurance subsidies. It's kind of ridiculous that anything like this could actually begin in the first place. In any normal workplace or organization, if you're thinking about doing something this bonkers, your co-workers are going to step up and say, "No, dude, don't do that." And you won't.

But if you were a Senate Republican, and you knew that Jim Bunning was going to do something like this, would you have any incentive to pre-emptively stop him? I really don't see how. Nobody is going to hold it against James Inhofe or Jon Kyl that Bunning did his crazy thing. Bunning is retiring, so it's not like you need him to win re-election so you can be in the majority again. And worst of all, ordinary people in your state who are affected may not have any idea that Jim Bunning is the asshole responsible for all this shit. Ordinary people don't know who all the Senators are or what they're doing. When they go into the voting booth, the effect of Bunning's stunt may just be to make them think, "Well, the first two years of Obama have been awful" and vote against the president's party.

Of course, you can't let Bunning keep doing this forever, or it becomes a really big spectacle that hurts you. And there are opportunities for Olympia Snowe or whoever to score moderate points by publicly dissing Bunning (which is no reason for them to privately stop him beforehand). But I really don't see that Republicans lost anything by letting him get started.

More nakedly partisan use of the presidential megaphone, with forceful attacks on the Republican Party when they allow this kind of garbage, would probably be better for Democrats. It'd hurt Obama himself, too, and Obama's desire to keep his hands clean, stay above the fray, and refrain from blaming even the blameworthy may be part of why he's got a positive net approval rating even with the economy in bad shape. But two-party

electoral competition is a zero-sum game, and we might be doing better in a bunch of House and Senate races if people understood that the Republicans in Congress are ridiculously horrible people who obstruct your unemployment benefits and then complain about how they've worked so hard at doing so that they didn't get to watch a basketball game.

And if you haven't been following this closely -- yes, I'm serious. Bunning said: "I have missed the Kentucky-South Carolina game that had started at 9 o'clock, and it's the only redeeming chance we had to beat South Carolina since they're the only team that has beaten Kentucky this year."
Posted by Neil Sinhababu at 3/02/2010 10:53:00 PM

The Democrats could have stopped him just by staying up late. One guy outlasted more than fifty.

Which actually is easier for the one guy, when you think about it.