Sherrod Brown Has The Right Idea 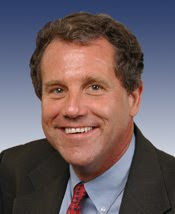 Put Sherrod Brown on your list of "Democrats you want to see rising in power":

Sen. Sherrod Brown (D-Ohio), 57, who also won his seat in 2006, has his sights set on forcing Democrats to have elections for committee chairmanships. (In the House, each party caucus holds direct elections for chairmen and ranking minority members.) This is a particular sore point to the newcomers, who viewed Sen. Joseph I. Lieberman's support of GOP presidential nominee John McCain as the sort of treachery that should have resulted in the Connecticut independent surrendering his chairman's gavel.

To see how important this is, here's Ezra Klein last August when Chuck Grassley was using his personal connections with Max Baucus to hold up the attempt to get health care reform out of the Senate Finance Committee:

This is the final year that Grassley is eligible to serve as ranking member — the most powerful minority member, and, if Republicans retake the Senate, the chairman — of the Senate Finance Committee. His hope is to move over as ranking member of the Judiciary Committee, or failing that, the Budget Committee. But for that, he needs the support of his fellow Republicans. And if he undercuts them on health-care reform, they will yank that support. It's much the same play they ran against Arlen Specter a couple of years back, threatening to deny him his chairmanship of — again — the Judiciary Committee. It worked then, and there's no reason to think it won't work now.

It's possible that the Republican Party has too much party discipline for its own good. Two of their people have shifted to our side over the last decade. There have been zero going the other way, and we have much greater problems with Nelson and Lieberman types extracting ludicrous concessions. They stuck to George W. Bush's policies as their Senate majority was whittled from 55 to 41 over the course of the 2006 and 2008 elections.

There's no similar case with the Democratic Party. We haven't had to deal with people escaping the party, and our major problems during the health care struggle had to do with centrists like Nelson and Lieberman who asked for ridiculous things that weakened the legislation. Reining these guys in is the important thing to do, and new rules about committee chairmanships are as likely a proposal as any to have the right effect.

Killing the filibuster would do far more to fix the Lieberman/Lincoln/Nelson problem.