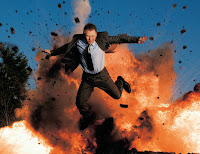 I'm thinking that these two criticisms of Raul Grijalva, if right, synthesize pretty well into a defense of what he's doing. First, Matt Yglesias:

He deems it a “slap in the face” that certain things, especially HSA expansions, were added in exchange for zero GOP votes while progressives are getting nothing from the White House on a public option. And it’s true, Grijalva and other public option advocates have been slapped in the face. That said, the bill at hand is a boon to low-income Americans who desperately need help affording health insurance for their families. If you vote “no” and kill the bill, Barack Obama’s family will still be fine. Its families in Grijalva’s district who’ll pay the price.

Second, Jonathan Bernstein just before he went off to blog for Andrew Sullivan:

I'm definitely getting the feeling that Grijalva isn't going to be up on whatever Arizona's version of Mt. Rushmore is. The guy has one move, right? Step One: Raul Grijalva threatens that he'll vote against health care reform because the bill isn't far enough to the left. Step Two: No one pays any attention. Step Three: Raul Grijalva supports the bill. Step Four: The bill moves a little bit further away from Grijalva's preferences. Step Five: Repeat.

Matt's definitely right about bill > no bill. And while I've been very worried about this at various points in the past, I'm coming around to the view that Jonathan is right about Grijalva always seeing reason and eventually getting aboard.

So assuming Jonathan is right, what's gained by Grijalva's empty threats? Well, his only real power is his ability to shape whether legislation is seen as being liberal by complaining about it or not. If the chairman of the Progressive Caucus calls it a slap in the face, that weighs against it being treated as liberal, and people in the traditional media treating it that way helps it pass. It's kind of odd that somebody's best way of helping a bill is by being a political stuntman doing scenes where authors of legislation slap him around, throw him off bridges, and otherwise abuse him in picturesque ways. America, this is your politics.

Addendum: If I were a blogger of great significance (?!) and I posted this, would I be messing up Grijalva's game by calling attention to it? I don't think so. For the media to understand what he's doing, they'd have to come to terms with their own role in the process of determining whether something is treated as liberal, and how screwed up it is. And they're not going to do that.
Posted by Neil Sinhababu at 3/05/2010 01:00:00 AM

Hmmmm, I'm not so sure about this. I don't know Raul Grijalva, but my experience with most members of congress is that they are mostly egomaniacs and when they withhold support from a bill it's because they want a concession or they really don't support the bill.

My take: Grijalva really does want a public option and thinks that Democrats are probably only going to pass the thing by a vote or two and that this is his best bet at pushing the plan forward. He might have a big enough ego to believe this will work, or this could be a last-ditch, at-least-I-tried type of thing. He very well may be considering voting against a bill without a public option (and he isn't the only one in congress mulling that option, I can assure you), though when Pelosi, and Emanuel, and Obama call him and plead for his vote and promise (lie about?) a public option down the road, Grijalva will give in rather than sink reform. I just can't imagine that Grijalva is promising to vote against the bill because he knows that he is such a liberal caricature, the media will frame the bill in a moderate light, making the bill more likely to pass. Rather, my guess is Grijalva thinks he is an important player and he's hoping that withholding support will get him important concessions.

With all that said, you could be right, though I'm not sure that liberals attacking the bill have much impact on the media narrative. Most coverage is he said, she said and runs along the lines of "Obama promises the bill will cut costs and cover 30 million Americans, while Republican opponents criticize the bill as a socialism and a government takeover of medicine." Unless Grijalva's criticisms convince the GOP otherwise, it is hard to see his public-option battle cries as having much impact on anything.

If Grijalva had this much savvy he wouldn't have been saying the things he said after the MA Senate election. So I doubt that this is some sort of somewhat convoluted scheme to make Obama etc. seem more centrist than they are.

Also, there are really costs to convincing 15-20% of the Dem base that the Senate bill is so bad that it is worse than nothing.

Why isn't someone trying to convince 15-20 percent of the Dem base that this Republican-lite insurance bill is good?

Our leaders don't care; they don't have to. See also Simon Johnson. Losers.