I'm glad that Ezra got so much discussion going with this observation:

President Obama, if you look closely at his positions, is a moderate Republican of the early 1990s. And the Republican Party he’s facing has abandoned many of its best ideas in its effort to oppose him.

If you put aside the emergency measures required by the financial crisis, three major policy ideas have dominated American politics in recent years: a plan that uses an individual mandate and tax subsidies to achieve near-universal health care; a cap-and-trade plan that tries to raise the prices of environmental pollutants to better account for their costs; and bringing tax rates up from their Bush-era lows as part of a bid to reduce the deficit. In each case, the position that Obama and the Democrats have staked out is the very position that moderate Republicans have staked out before.

I thought it was kind of nifty how Ezra supported the left-wing critique of Obama's positions in a way that mostly didn't feel very left-wing at all -- just neutral and historical. I was excited to see that Nate Silver had a post on it, but I kind of choked on this:

I’m a big fan of Mr. Klein’s work, but I don’t find his thesis persuasive in this case. Instead, I’d suggest that the evidence points toward a considerably less exciting conclusion. Rather than being an early 1990s moderate Republican, Mr. Obama is a prototypical, early 2010s Democrat.

And here we miss the point by taking things too literally. I think Nate's argument would've been complete with some kind of mathematical evidence to show that it's the early 2010s, so obviously Obama can't be an early 1990s moderate Republican. In any event, it's no surprise that Obama and current Democrats line up so closely. These two things aren't independent variables. Obama's the leader of the Democratic Party and he sets its agenda. I don't know how you use data like Nate's to evaluate agenda-setting choices, when each of several choices would leave a large number of Congressional Democrats with no real option but following along.

I like Nate's chart, though. Maybe I've seen data using this technique before where you assume that incumbents have constant ideological positions and use that to help you determine whether new legislators are moving a party left or right, but this is the first time it's been explained to me. And here's what you get: 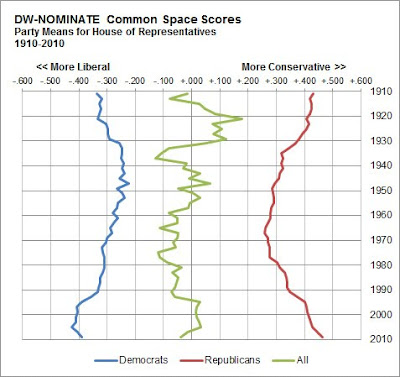 Three lines, and it tells you a lot. Unrelated to the current discussion, I like how it supports the Civil Rights Act theory of why bipartisanship died. Basically, you go from having 3 groups -- segregationist Dixiecrats, pro-labor Northern Democrats, and pro-business Republicans -- to the current 2 groups that fit better in ideologically coherent parties. The Dixiecrats form the core of the new Republican Party and the more moderate Republicans become Democrats. On this chart, the closest things get is in the mid-1960s when the Civil Rights Act passes, and the parties separate from there.
Posted by Neil Sinhababu at 4/30/2011 09:08:00 AM