Ethics Today Is Where Physics Was In The 1600s 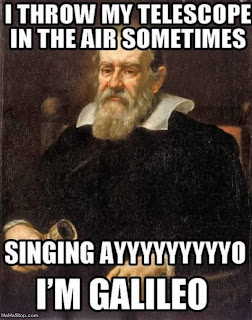 There's plenty of fodder for discussion in this Will Wilkinson / Adam Ozimek / Julian Sanchez conversation, but let me just chew on this from Adam:

Another reason I’m skeptical, at least of moral objectivism, is the following thought experiment. Say you had an unlimited amount of money and time to persuade the chief of some Amazonian tribe of an objective scientific claim that the best evidence suggests is true. Say, that the earth revolves around the sun, or some other basic scientific claim. You can conduct scientific experiments, sit with him in the library going over the literature, and argue with him for 1,000 years. No matter what the starting point of his knowledge and beliefs, you should eventually be able to convince him of the truth as best as the evidence indicates, after all, its demonstratable knowledge.

Now say this tribesman believes that murdering an enemy and eating his heart pleases the Gods. With unlimited money and time, is there any way you could demonstrate to him the falseness of his beliefs? Well, you could try some Ghost of Christmas past shit and take them to see their victims mourning families and such, but in many cases this would not be successful. Those with horrifying moral beliefs are often quite aware of, and even relish in, the suffering that is caused. I also think this thought experiment would hold true for many moral beliefs that we find horrendous and those who hold them. To me this to me is an important distinction. There is simply no way to demonstrate the truth of the claim to people who disagree.

I don't think Adam's point of view is at all unreasonable, given where we are today. But I'd liken his view of moral questions to the ones a thoughtful and well-traveled observer might have had about cosmological questions in the early 1600s: There are all these different beliefs around the world about the nature of the universe, and there doesn't seem to be a way to demonstrate to mistaken people the falsity of their beliefs using rational argument and evidence!

Then the awesome happened: people like Galileo and Newton came along and developed a scientific methodology that would enable us to actually get the right answers to these questions. Nowadays we call these people physicists and not philosophers, but it's not an accident that Newton's great work was titled the Philosophiæ Naturalis Principia Mathematica, or "Mathematical Principles of Natural Philosophy." In addition to their specific results about what orbited what and so on, they put forward a way of understanding how to investigate the natural world that has proved tremendously fruitful. Adam can say what he can about the "basic scientific claim" of which he tries to convince the chief in the first half of his thought-experiment because of what they gave him and all of us.

In metaethics, the area of philosophy that I primarily work in, many of us are trying to accomplish something roughly similar to what happened in the 1600s, but in ethics. As a naturalistic realist about ethics, I'm thinking that things will go very broadly like they did in physics -- we work to discover what counts as evidence for and against moral claims, and when we put the resulting methodology of ethics to work, we find solid evidence that goodness is actually something objective in the natural world. I'm a hedonic utilitarian, and I think the correct methodology shows us that goodness is pleasure, but lots of naturalistic realists would disagree with me on details like that. And lots of people in metaethics disagree with naturalistic realists, thinking that there might be no objective moral facts, or that they might exist outside the natural world (maybe in Plato's heaven with the numbers and all the other Platonic Forms).

But anyway, that's the quest I and my naturalistic realist buddies are on -- trying to set up the foundations for ethics so that it becomes a proper science. If we're successful, people in future centuries might forget that ethicists ever were considered philosophers, much as they don't think of physicists as philosophers anymore.
Posted by Neil Sinhababu at 4/10/2011 09:01:00 AM