Why McCain Could Win And Romney Probably Can't

In response to my skepticism about Romney's chances of winning the GOP primary, Matt Yglesias tweets: "Folks who think Romney can't win a GOP primary need to explain how the heretical McCain won."

First, the extreme wing of the GOP wasn't as energized during the 2008 primary as it is now. 2008 sees GOP moderate Susan Collins running unopposed in the Maine GOP primary. I don't think that would happen now. Something happened between then and now to turn the GOP base into a much stronger political force. I think it's paranoia based on bizarre ideas about what President Obama is up to, fed by right-wing entertainers like Limbaugh and Beck. In any event, the 2010 Senate primaries lead me to think that the GOP base will be a much bigger force in the 2012 primary than it was in 2008. 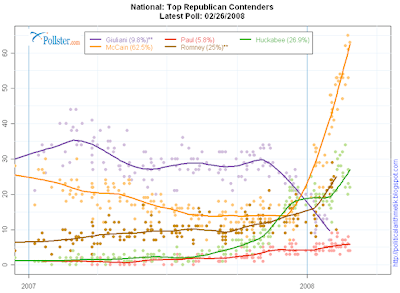 Second, while McCain wasn't trusted by the GOP base, he had a better record on their issues than most alternatives, making him an acceptable option. He supported invading everything and had a zero rating from both NARAL and Planned Parenthood. Obviously, I'm not the person who movement conservatives should be turning to for strategic advice, but Ramesh Ponnuru is, and he was telling people that McCain was a good choice. Who else were you going to vote for? Pro-choice Rudy Giuliani? Antiwar Ron Paul? Tax-raising Mike Huckabee? Flip-flopping Mitt Romney?
Posted by Neil Sinhababu at 4/14/2011 08:52:00 AM

There are two big differences between the assorted 2010 Senate GOP primaries and the race for the 2012 GOP nomination.

One is that you don't just have one establishment candidate and one Teabagger candidate; you have several of each. And a lot will depend on how unified or divided the votes are on either side.

Obviously, a lot could change yet, but at this point, Romney is in pretty good shape on the establishment side: neither Pawlenty or Daniels has picked up much support, and you'd have a hard time convincing me that either Barbour or Huntsman is going to go anywhere. Until that changes, Romney is the only establishment candidate on the leader board, and that's going to help him.

Especially if things stay fragmented on the Teabag side, which brings me to the second difference. People are willing to put up with craziness in a Senate candidate that they'd be unwilling to in a Presidential candidate. Sharron Angle, Rand Paul, and Christine O'Donnell can win GOP Senate nominations, but not many people - even among Teabaggers, I'll bet - are going to hold their noses and vote for someone like that to be their Presidential candidate.

This is because all you really want in a Senator is someone who'll vote your way and express the opinions you'd express, if you were in that position. Anyone can be a Senator. But a President has to actually run the country. Even radicals realize you can't just do the job by posturing.

That's going to make it hard for the Teabaggers to find a candidate. Palin? Bachmann? Newt? Trump? Huckabee? Trump's abrupt rise isn't so much a symptom of the overall weakness of the GOP field, but of the weakness of the Teabagger-acceptable candidates. Even the wingnuts are holding their noses and hoping for someone better.

Which is why Mitt can win.

It's also (something up your alley here) opportunity knocking on Jim DeMint's door, if he cares to answer it. Problem there is, he seems to have gotten comfortable with his kingmaker role. It would take a lot to get him to shift gears, I suspect.

Good points all. And I totally agree about DeMint.