The Dollar Is Dropping, All Is Well 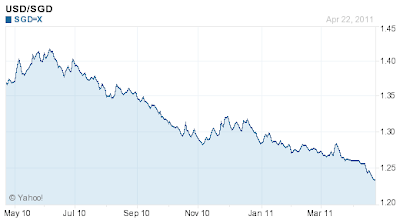 It's good for some Americans when the dollar falls in value relative to other currencies. Most importantly, US businesses find it easier to sell their products abroad, since American goods become cheap. Since I get paid in foreign currency, I'm an unusual case, but it's great for me. The number of Singapore dollars that make a US dollar has fallen nicely over the past year, as the chart shows. Recent debt ceiling worries have accelerated the process. I have some nifty plans for all my riches of the Orient that I'll share with you guys soon.

Unfortunately, I don't expect that the economy will get the benefits of monetary easing out of debt ceiling-related declines in the value of the dollar, just because these declines will be so temporary. I'm pretty sure that the debt ceiling will get raised without too much trouble, and the current dip will be quickly undone.

Why do I think we'll get a debt ceiling increase? Well, we avoided a government shutdown over the budget, and a debt ceiling failure would be a bigger deal. Also, Obama has more cards to play in this one since he gets to decide who gets paid in IOUs first. I'm feeling pretty good about him playing it right, since the budget deal turned out to be pretty good once it became apparent that a lot of the budget cuts weren't as severe as they seemed to be.
Posted by Neil Sinhababu at 4/25/2011 01:50:00 AM