In Soviet Russia, Ape Evolves From You 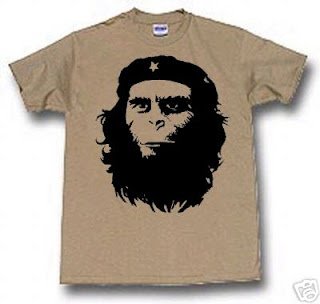 Moscow archives show that in the mid-1920s Russia's top animal breeding scientist, Ilya Ivanov, was ordered to turn his skills from horse and animal work to the quest for a super-warrior.

According to Moscow newspapers, Stalin told the scientist: "I want a new invincible human being, insensitive to pain, resistant and indifferent about the quality of food they eat."

...Mr Ivanov's ideas were music to the ears of Soviet planners and in 1926 he was dispatched to West Africa with $200,000 to conduct his first experiment in impregnating chimpanzees.

Meanwhile, a centre for the experiments was set up in Georgia - Stalin's birthplace - for the apes to be raised.

Mr Ivanov's experiments, unsurprisingly from what we now know, were a total failure. He returned to the Soviet Union, only to see experiments in Georgia to use monkey sperm in human volunteers similarly fail.

I hope the human volunteers were actually volunteers. If they found women who wanted to be the mothers of a new ape-human warrior race, those would be some pretty impressive ladies. Given the early USSR's record on human rights, though, I'm worried that it wasn't anything like that.
Posted by Neil Sinhababu at 6/04/2011 11:11:00 PM

It is almost as if Stalin read Bulgakov's satirical novel Heart of a Dog (written in 1925) and decided that this was actually a good idea!