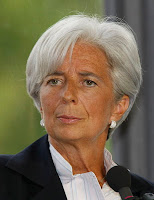 Apparently Christine Lagarde is the leading candidate to run the IMF. This makes an obvious sort of political sense -- if a male former leader dishonors your organization by raping, and you have qualified candidates of both genders available, it's nice to pick a woman.
I'm trying to get a sense of what she thinks about monetary policy, but it's hard to see. Two months ago she said that 2% inflation in France isn't alarmingly high, which I guess means she's not insane, but obviously I'd like to see easier money than that. Heike Gobel, translated from German, seems to be saying that "She recommended to Germany to dampen its strength in exports via higher wages" which sounds nice.
I'm pretty sympathetic with the rest of the world's requests to end the system where an American runs the World Bank and a European runs the IMF. There are lots of other countries (and, um, races) out there. The other leading candidate, Mexican Agustin Carstens, fits that bill. I guess what really matters to me is that we get someone who combines technocratic competence with concern for the well-being of people in the lower reaches of the income scale. Someone should ask Esther Duflo and Amartya Sen whom they want. If they agreed on somebody I'd be totally for that person.
Posted by Neil Sinhababu at 6/14/2011 12:42:00 AM