Via Matt, this is awesome:

Scientists have designed a brain implant that restored lost memory function and strengthened recall of new information in laboratory rats — a crucial first step in the development of so-called neuroprosthetic devices to repair deficits from dementia, stroke and other brain injuries in humans.

Though still a long way from being tested in humans, the implant demonstrates for the first time that a cognitive function can be improved with a device that mimics the firing patterns of neurons.

I'm excited about this not only because of its implications for "repairing deficits" as the article puts it, but for integrating mechanical devices into the brain more generally. Like giving humans new awesome powers. Or, as Dylan Matthews reminds us, downloading otherworldly sex dreams!
But right now I'd like to focus on something a little more banal. The lead author of the study is Theodore Berger at USC, who worked with a bunch of people there and at Wake Forest. His bio states that "Dr. Berger currently is chairing a world-wide study of brain-computer interfaces that is being funded by multiple agencies of the NSF, NIH, and DoD." And that fact is probably going to be forgotten when private industry starts selling a cure for dementia or a way to surf the internet using a chip in your brain or whatever, and by whatever I mean Remus Lupin and Alyson Hannigan having celebration-sex in Lothlorien after they won it for the good guys. Or, um, whatever you'd download. 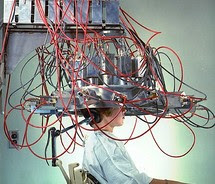 But the point is, all that starts with a government-funded study done by a professor. It's an awesome scientific breakthrough! And I don't see why we couldn't pile breakthrough upon breakthrough using the government for funding and academia for talent (plus contract labs for the grunt work, commissioned by a Fed-like body of scientist/technocrats who would decide which projects deserved that kind of investment) to get the silicon all the way into your head. Even if it ended up being a bit slower than the current process, where all the basic research is done by the Theodore Bergers of the world and funded by you and private interests carry the ball the last three yards into the end zone and do a touchdown celebration as they collect billions in profits, that would be worth it for making the intellectual property free to everybody immediately instead of making it cost a fortune until 17 years later or whenever it went off-patent.
Posted by Neil Sinhababu at 6/17/2011 07:27:00 AM

I'd like to see research and clinical work to get basic health care for all citizens in Amwerica, and curing the common cold or diabetes, thereby saving the lives of a multitude of people who die from common disease.

Vast funding of something that helps a small percentage of people while simple health cre is not affordable for 50 million people is an unwise use of limited resources in my opinion.

I would be really surprised if any of the claims made by the researchers are even close to accurate. Researchers at wake forest are known for making stuff up to get grant money.

Animal researchers are pretty much the shock jocks of science, they claim a lot of stuff to be compelling, of course none of it ever works. Kind of destroys the credibility of real scientists.