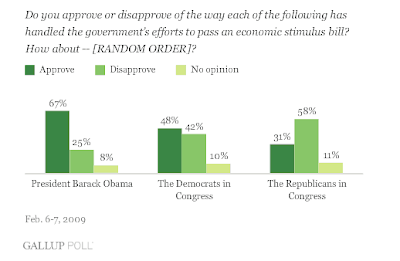 It's worth pointing out that two-party politics is necessarily a zero-sum game; that is, one party's loss is always the other party's gain. So the fact that people think the Congressional Republicans are not behaving very well suggests that all this posturing has so far been for naught. I know it's fashionable to argue that the GOP is playing its hand correctly; that Obama will get credit for recovery under any circumstances, and thus the best thing they can do is force the stimulus bill to be as weak as possible, vote against it anyway, and then hope it fails. That may be true. But it at present, the public isn't buying what they're selling.
Posted by Nick Beaudrot at 2/09/2009 07:22:00 AM