Jane Hamsher hasn't responded to what I understand as Ezra's point, so let me make the point again. 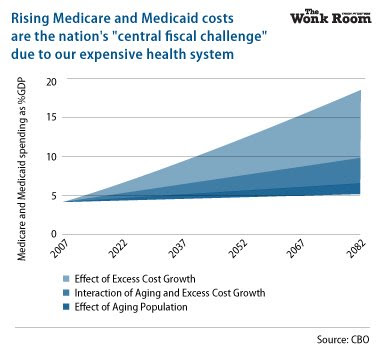 There's a bunch of Washington Post types who have been pushing the "entitlements are going to bankrupt us, let's cut Social Security" line for a while now. Orszag's response: "Social Security faces an actuarial deficit over the next 75-100 years. In the past, I’ve resisted the term ‘crisis’ to describe that kind of situation. This is not quantitatively as important as getting health care done.” And then, charts like this.

So, Mr. Broder, how do you like the idea of spending 18% of America's GDP on Medicare? Half of that, mind you, will be because of "excess cost growth." Now wouldn't you like a plan to control excess cost growth?

The idea is to give entitlement scaremongers something to really be scared of. That is, rising health care costs, which Ezra has argued is Orszag's obsession. (You can see it on Orszag's old blog.) Do this right, and you make them our allies, or at the very least not our opponents, in the health care fight. They're the sorts of people who will buy a story about big costs eating us in the future. Sell it to them.
Posted by Neil Sinhababu at 2/20/2009 09:07:00 AM

Thanks for posting on this.

As a dedicated C-SPAN listener, I have been a fan of Orszak for a long time. His lucidity is stunning. His point is here, which you correctly emphasize, is that the health care problem can never be fixed so long as social security is lumped together with Medicare and called "entitlements".

If I may add two other rhetorical points to our arsenal as we tell our friends and neighbors about the facts of life. Social Security also pays for disability and survivor's benefits. There are many people who are barely functional in our society whose only assistance comes from social security income.

Medicare is administratively efficient. The CFO and CEO of CMS are SES civil servants who make under $200,000 (including bonus) per year for a program that administers healthcare to 45 million people and oversees medicaid in 53 jurisdictions as well as many privately insured. Larry Glasscock, CEO of Wellpoint, the nation's largest health insurer, but one considerably smaller than CMS, received a total compensation of $46.2 million.