A Long Way From Roncevaux Pass 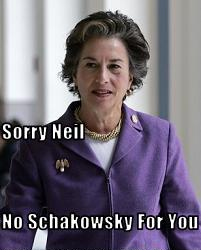 Josh Marshall asks, "Alright, how long do you give Burris?" And I'm sad to say that I don't think we're going to be rid of him easily. Anybody who went out and accepted the Blagojevich nomination isn't especially sensitive to the social sentiments that would cause you to leave in shame. If we get rid of him, it'll either be by formal means of some sort (something like impeachment, though I don't know if remedies like that are available) or by taking some kind of action that basically makes it impossible for him to do his job. Which is bad, because his kind of drama doesn't help things, and because I don't think somebody who does what he did is going to be an especially good Senator for Illinois, and because I'd love to have the megaprogressive Jan Schakowsky in there instead.

As I said before, good on Harry Reid for trying to keep this guy out. Even if he failed, it'll go a long way in quarantining the perceptions of corruption.

Update: Maybe I actually can get some Schakowsky, with the possibility of Illinois changing the law to have a special election. We'll see.

Some blogger, I don't remember who, suggested that the Illinois legislature could get rid of Burris easily just by scheduling a special election for his seat. The Constitution says that appointed Senators serve "until the people fill the vacancies by election as the legislature may direct."

What Burris is accused of doing -- talking generally about his interest in being appointed to office and about raising money for an ally in politics, and answering questions in a way that is incomplete but probably not technically perjurious -- is no different from what most senators and representatives do every day of the week.

So why all the hatred and aggression toward him? Having a tacky mausoleum is not an impeachable offense.

Burris is being scapegoated because that serves the politically useful purpose of distracting people from the prevalence of pay-to-play deals in politics, many of them much more blatant and corrupt than anything Burris has been charged with. Senators are "shocked, shocked" to find out there is politics going on with Senate appointments.

Also, there are a lot of powerful people who backed Reid's efforts to block Burris, and were burned when it turned out the Senate had no legal power to reject him. Now they want his scalp, because they are embarrassed that they had to back down.

If Burris has broken the law, let that be dealt with. But unless there's clear evidence of that, Dems would do better to put their energy into electing a better candidate in 2010, instead of trying to drive this one from office in the meantime.

Yeah, what AJD said. I don't think Burris will resign before then, but I think he will be replaced via election in fairly short order.

tkd -- the problem, if true, is that he lied to the Illinois legislature about contacts with and fundraising for, Blagojevich. This is the senate seat vacated by the president of the united states and it has a lot, if you'll excuse me, of value, symbolic and otherwise.

My problem with Reid's position was that the legislature was not going to call an election because they didn't have the money and the democrats were afraid they would lose. I still think that's the case, though some folks with better Illinois connections assure me that the dems won't lose it. Even so, there's still a big money issue. The seat is a terrible pr problem for the democrats as long as Burris holds it. Maybe the Senate Ethics panel can boot him, maybe he will resign based on further information, maybe the legislature goes for broke and holds an election, all good things to wish for.

If there is no senator at all, btw, the democrats gain an advantage because the number of cloture votes drops to 59 until the Minnesota seat is filled. I think.

drip, I read to same thing about cloture somewhere.

I have to say, it's good to see Reid vindicate, in a sense, in his original obstinance, but this still sucks.

Drip -- check the answers Burris gave to the Illinois legislature, because from the transcript I've seen, it's far from clear that he lied. He was asked if he had spoken to people about wanting the nomination, and he said yes. He illustrated with an example. He later went back and named others he had spoken to -- which is amplifying, but not necessarily contradicting, the original answer.

Holding a special election would create another legal quagmire. Burris would argue that his appointment is valid and final, and that the state cannot change its method of filling the seat after the fact. He would have a good point, and it's far from clear that the Supreme Court would resolve the matter in favor of an election.

As for Burris being a "terrible PR problem for the Democrats," that is very unfortunate, but it's not a valid basis for impeachment, or for hounding him out of office.

Reid's attempt to block Burris has not been vindicated -- it was, and remains, a lawless and unconstitutional threat, and an embarrassment to Senate Dems and the advisors who led them into that disaster.